As the DEM team winds down its support to the Westchester County Emergency Operations Center (EOC), DEM Deputy Director, Rob Dudgeon, shares the importance of always 'leaning forward' in our our personal preparedness.

We’re transition to days, so we got the night off tonight. That’s good news for Westchester County as it means that they’re able to scale back night operations. It’s good news for us too! I’m happy to help any way I can, but I can’t lie and say that nights aren't hard when you’re used to working days. I haven’t pulled nights on a regular basis since the 90’s when I was much younger and a riding the box (ambulance). My internal clock is set to days – and suits instead of 5.11’s – but that’s a whole other discussion. 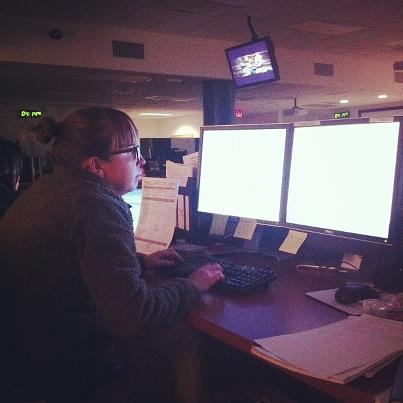 Today was good for the team; gave us a chance to take a breather and put some of this into perspective. We talked through some of our observations and got a meal in a restaurant that wasn't pasta (I have nothing against pasta! It’s just a mainstay food in operation’s centers and we are on day four…). I did a press call in to KGO and they asked what was the lesson for back home…in that instance it really came struck me just how important being prepared is for us. Think about it…they had warning! Days to prepare in advance of a huge storm – and it still knocked them on their butts. I’m not even talking about the people who ignored the warnings (although that didn't help any), I’m talking about those who heeded the warnings…the utilities, the local governments, the state and even FEMA. They mobilized for this…they were “leaning forward” as we like to say and yet, well…they got slammed. Can you imagine how bad it would be if they hadn't mobilized? What then? The stories of want and need; the losses and lives upturned; it would have been staggering. But as difficult as it’s been, those that did prepare are faring far better than those who didn't.

So the take away is this: nature is fierce, and in our case you won’t get notice that you should stock up on supplies and put gas in your car, or even evacuate…you’ll know there was an earthquake when you out from under your desk or table and see the floor piled with the contents of your shelves. There it is folks…the reality is that there won’t be any ‘leaning forward’ to in advance of the earthquake. No ice ready to distribute, no utility teams staged, no strike teams moved forward….it will all happen after the disaster strikes. I’m really against the ‘scare tactic’ approach to preparedness, so don’t take this blog in that light…it’s meant to be a commentary on the realities of disasters.

There’s a ton of good news here as well…preparedness really isn't that hard and truthfully you are farther along than you think. Look around the house, you probably have most of what you need already. There’s plenty of tips on line (72hours.org) and even fun ways to prepare (SF Heroes), it’s just a matter of recognizing your strengths and filling a few gaps. Get beyond the kit…think about what makes you comfortable (not MRE’s and foil blankets!) and stock up on those things.

You’ll sleep better at night knowing that when it gets difficult, you have already ‘leaned forward’ and can ride out the first few days in relative comfort while that big disaster relief machine gets fired up and starts moving people and supplies to set things right.

What am I going to add to my own stock? A crank cell phone charger. My crank charge emergency radio came with charging tip (in the late 90’s when I got it). If you are wondering when I realized it didn't have a USB tip or slot too charge my smart phones? It was when I was packing my kit to head to the airport on deployment here. Even someone who does this for a living needs to think about their own preparedness from time to time.

Have a great day…I’m off to bed so I can get back to day watch in a couple of hours.