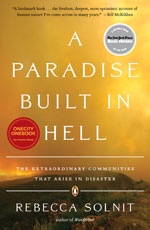 Most people who’ve had the pleasure to visit or live in San Francisco recognize that our beautiful city has a character unique among other metropolises, owed in large part to the engaged, motivated, and active individuals that knit together disparate neighborhoods into one singular community of pride. Indeed, San Francisco has long enjoyed a reputation of pride: pride in uniqueness, pride in individuality, and pride in community.

This year, they have selected a book by renowned San Francisco author Rebecca Solnit (you may remember her earlier work, Infinite City: A San Francisco Atlas, being scooped up by every urban mapping enthusiast in 2010) and the San Francisco Department of Emergency Management could not be more thrilled to help promote its messaging and encourage every San Franciscan to become a part of the discussion.

A Paradise Built In Hell: The Extraordinary Communities that Arise in Disaster speaks directly to our agency ethos to empower individuals and communities by supplying them with the tools for success, facilitating collaboration between the public and private sectors, and recognizing the significance of mutual aid in formal and informal networks. On the topic of mutual aid, Solnit writes:

He [sociologist Samuel Henry Prince] adds, “Communication has transformed mutual aid into a term of worldwide significance. As at San Francisco, when from all directions spontaneous gifts were hurried to the stricken city … so it was at Halifax.” Though that aid wasn’t actually mutual; it was altruistic, given from afar by strangers who needed and expected nothing in return. Or perhaps it is mutual in a broader sense; such aid knits together a larger society in which standards of compassion and generosity are maintained. Those who give receive a sense of themselves as members of a civilized world in which they will receive aid when their need arises. But in Halifax itself the first aid was often directly mutual, when people who were themselves impacted reached out to others in need – Joe Glube, for example, distributing food and caring for the wounded while his home and business were smashed up and he himself essentially homeless. We often hear about heroes in disasters, but the window of time when acts of physical courage matter is often very brief, and those when generosity and empathy are more important to survival last for weeks, months, years.

Mutual aid means that every participant is both giver and recipient in acts of care that bind them together, as distinct from the one-way street of charity. In this sense it is reciprocity, a network of people cooperating to meet each others’ wants and share each others’ wealth. When the Mission District residents in earthquake-torn San Francisco refused to let institutional kitchens replace their community kitchens, they were refusing to let mutual aid give way to charity, which would define them as the needy with nothing to give rather than the community with everything to give each other. When Dorothy Day established the Catholic Worker, she endeavored to make the mutual aid by making the people they served active participants in the work projects. In flood-ravaged New Orleans, the radical group Common Ground Relief’s slogan is “Solidarity, Not Charity.” In Halifax, Prince noted, “the preference upon the part of the refugee for plural leadership and decision” and “the resentment which succeeds the intrusion of strangers in relief leadership.” People preferred to care for each other rather than to be cared for by strangers or governed by others.

As individuals stricken by disaster are observed doing all they can to help one another in significant ways, so do agencies help one other, and cities help other cities, in acts of mutual aid. Mutual aid is present in emergency management in multiple ways, from formal agreements among first responders, to innovative arrangements between city service providers and nonprofits, to the understanding that communities will inevitably rise as each other’s primary caregivers. San Francisco’s political and emergency management leadership have observed the lessons from disasters passed and sociological studies such as this book on community behavior and response in disasters, and we understand now more than ever that our role in managing disasters is to empower the community to successfully recover while preserving life safety.

One of San Francisco’s greatest civic qualities is the omnipresence of altruism and generosity in all areas of public and private life. The city itself contracts with hundreds of nonprofits to expand its capacity to serve the public, and our many charitable networks that fund services for vulnerable populations are nationally recognized for their efficiency and perseverance in a difficult economic climate. Despite fluctuations in giving, these systems have partnered with one another and with the city, the community, and with individuals to ensure that services can continue to extend as far as possible until resources are more abundant. This surge of altruism in “normal” times is a great indicator of how we can expect our community to behave in response to a disaster: with generosity and the earnest desire to help fellow San Franciscans, and not with the chaos and the ill intent often portrayed by Hollywood.

We hope to encourage our readers to participate in the One City One Book program by picking up a copy of Rebecca Solnit’s A Paradise Born In Hell and joining the discussion with friends, family, and neighbors. We want to know what you think about the role of the community, the role of the government, and how the two can work together to ensure a successful recovery after a disaster.

Kay Vasilyeva is a Disaster Recovery Planner with DEM, where her primary focus is the city’s resilience initiative. She’s a native daughter of San Francisco and works to ensure the perseverance of her city through any disaster. She promotes activism within the community and environmental stewardship as key resilient behaviors. Kay can be found on Twitter @kayvasilyeva.